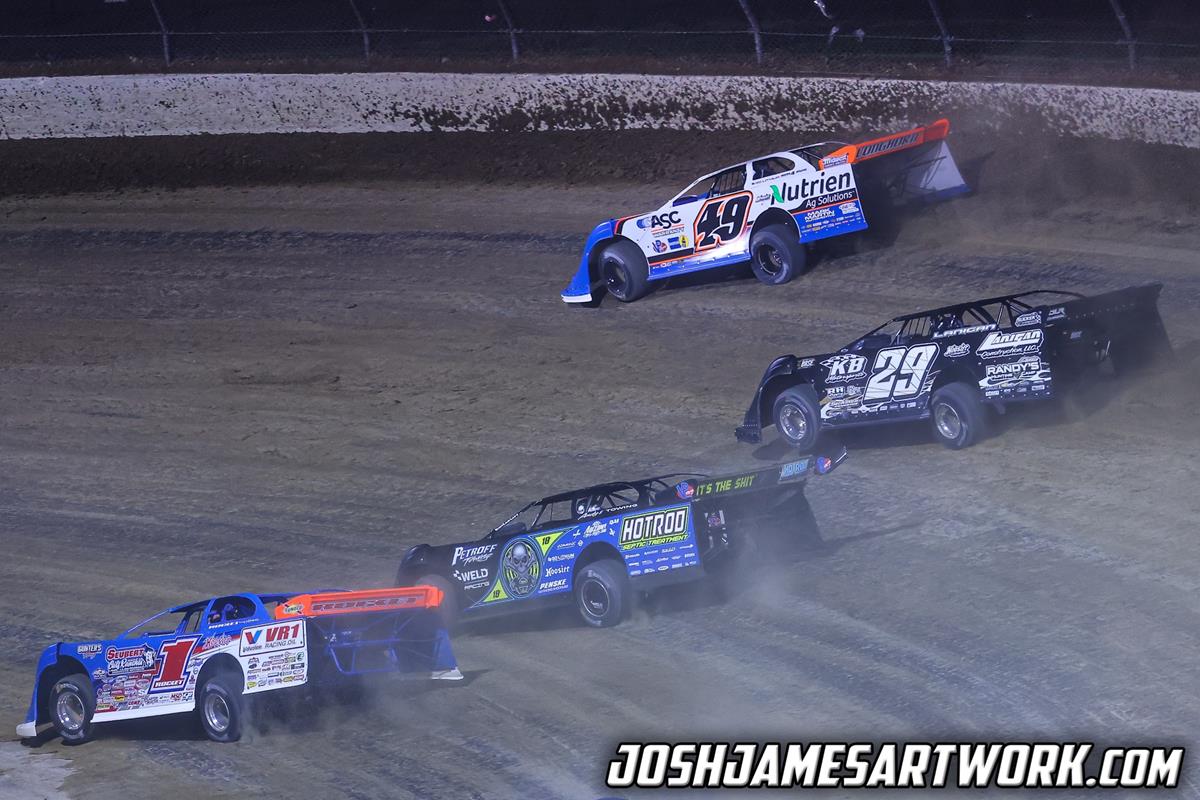 Rocket1 Racing and Brandon Sheppard battled the weather and a talented field of over 120 competitors last week at the second running of the Eldora Million as well as the Dirt Late Model Dream XXVIII at Eldora Speedway. (Josh James Artwork)

Sheppard finished ninth in the Eldora Million in the team’s Valvoline / Seubert Calf Ranches No. 1 Ace Metal Works / XR1 Rocket Chassis / Durham Racing Engine Super Late Model. Meanwhile, the completion of the Dirt Late Model Dream XXVII will have to wait a few months as persistent rain forced the event to be postponed to September 7.

“It was a long and grueling weekend for all of the teams, staff, and fans at Eldora Speedway. Mother Nature just kept us all guessing for four-straight days,” Sheppard said. “We got down a lap early in the (Eldora) Million on Thursday night, but we actually raced past (Jonathan) Davenport to get our lap back at one point. However, the top groove was tricky, and I got into the wall and our car wasn’t the same after that. We got a ninth-place finish there, and then we had just got rolling in the (Dirt Late Model) Dream, when the rain moved in so we’ll have to wait until September to see how that unfolds.

“We’re looking forward to getting back to action with Lucas (Oil Late Model Dirt Series) this weekend, and hopefully we can grab some wins and add to our point lead.”

Brandon Sheppard entered the Rocket1 Racing No. 1 Late Model into battle at the famed Eldora Speedway (Rossburg, Ohio) on Thursday morning after Mother Nature consolidated the second running of the Eldora Million into a single day.

Splitting the 124-car field into a pair of $12,000-to-win preliminary features, Sheppard’s third-place finish in his heat race pinned him on the sixth row for the A-Main.

Wheeling his way into the Top-5, Brandon passed eight cars in the 25-lap affair to register a fourth-place finish. He trailed Jonathan Davenport, Ricky Thornton Jr., and Bobby Pierce to the checkers with Jason Feger coming in fifth.

Later that night with his preliminary finish placing him on the second row of his heat race, Brandon missed a transfer spot by one position, relegating him into the B-Main. Needing to place second or better to make the $1,002,022-to-win Eldora Million, Sheppard scored a runner-up finish behind Dale McDowell. After running as high as fifth from the 24th-starting position, Brandon ultimately notched a ninth-place finish in 101-lapper.

For the Dirt Late Model Dream XXVIII on Friday afternoon, Sheppard laid down the 12th-fastest time in his group before placing third in his heat race. With $12,000 on the line in the preliminary feature, Brandon advanced forward six spots to finish sixth.

Earning the second-starting position for his heat race on Saturday evening, Brandon secured his spot into the $128,000-to-win Dirt Late Model Dream with a runner-up finish. Starting in the 10th position, Sheppard was running 14th on lap 14 when continuous rain forced officials to postpone the remainder of the 100-lapper to September 7.

Full results from the week are available at www.EldoraSpeedway.com.