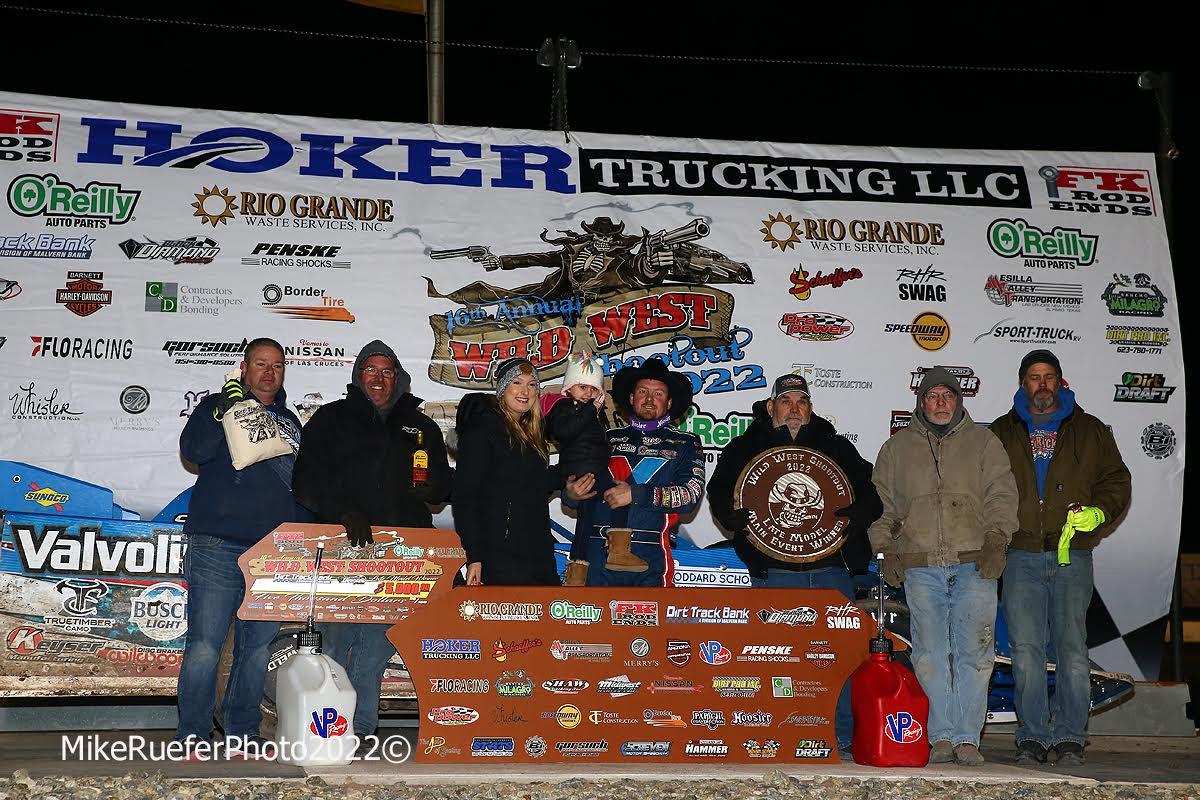 Not only did the Illinois driver receive a total of $10,000 for his Saturday and Sunday wins, but he now has a shot at the Penske Paydirt Jackpot $300,000 bonus, if he can complete a sweep of the miniseries.

“Wow, that’s all I can say about this car we brought to the desert. My team has given me a great hot rod, and so far I’ve been able to do my job. We got to the lead early Saturday night on the high side and cruised to the win. Sunday night wasn’t near as easy. We really had to work for it, and me and (Mike) Marlar, Terbo (Tyler Erb), and (Garrett) Alberson had a great race, and I came away with the win,” Sheppard said. “The track has been great so far, and now we are focused on trying to claim this $300,000 bonus.”

New Berlin, Illinois native Brandon Sheppard trekked to Vado Speedway Park (Vado, New Mexico) on Saturday afternoon to enter his TrueTimber Camo No. B5 Late Model into battle in the opening round of the 16th annual Wild West Shootout.

With 31 cars registered, Sheppard topped his time trial group in qualifying before placing first in his heat race. Rolling off third for the main event, Brandon raced past early pacesetter Bobby Pierce on the 14th circuit and paced the field for the remainder of the 30-lapper to capture his first win of the season and a $5,000 prize. Pierce, Mike Marlar, Stormy Scott, and Earl Pearson Jr. trailed him the checkers.

On Sunday afternoon, Brandon’s third-place finish in his heat race placed him 10th on the starting grid for the A-Main. After narrowly avoiding a tangle on the fifth lap with a slowing car, Sheppard began tracking down polesitter Garrett Alberson as the race closed in on the final 10 circuits. Sneaking ahead of Alberson and fending off Tyler Erb’s slider on the last lap, Brandon nosed to his second-straight $5,000 victory, which came ahead of Erb, Alberson, Mike Marlar, and Jake Timm.

With two wins in the bag, Sheppard now has his sights on claiming the Penske Paydirt $300k Jackpot. The promotion offers $300,000 for any driver, who can win all six Wild West Shootout Super Late Model features, a $100,000 bonus for five wins, and a $25,000 bonus for four wins.

Action for the mega miniseries continues on Wednesday, Friday, and Saturday with $5,000-to-win programs each night, while the six-race swing draws to a close on Sunday evening with the $25,000-to-win Rio Grande Waste Services 50 presented by Shaw Trucking.